★ Announcing the KHUX Twitter Screenshot Contest where everyone's a winner!
Use avatar parts to create the perfect Halloween costume and submit a screenshot for a chance at winning 5000 Jewels!
Plus, get a Fantasia Mickey B and 3000 Jewels if we reach a total of 15,000 retweets before the deadline! 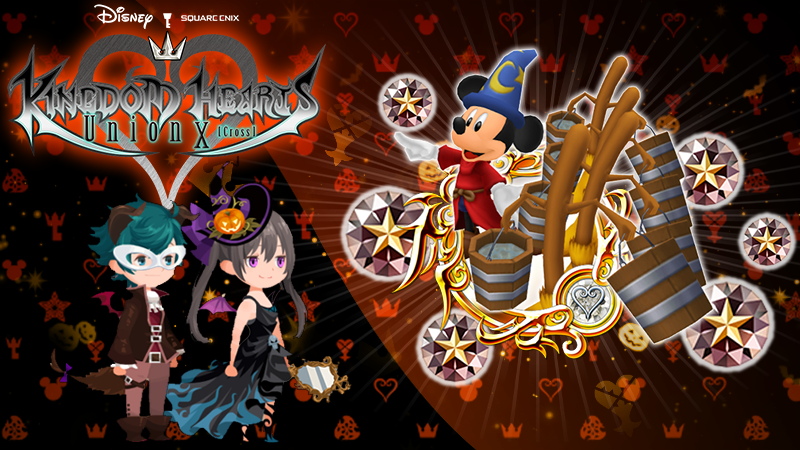 ■ Theme:
Use avatar parts to create a ghastly, adorable, or even hilarious Halloween costume and take a screenshot of your character wearing that costume!

■ Prizes:
At the end of the contest entry period, the KINGDOM HEARTS Union χ[Cross] team will select 5 winners, and the Producer, Mr. Okayama, himself will choose 1 additional winner! Winners will be selected based on overall creativity and originality. All 6 winners will be awarded 5000 Jewels each!

Read on for more information on how to participate!

■ How to Enter:
1. Follow the official KHUX Twitter account (@kh_ux_na).
2. Take a screenshot of your character wearing their Halloween costume. Screenshots of your character and costume taken in the Outfits menu or taken during solo play are both acceptable. Multiplayer screenshots are not acceptable!
3. Tweet your image along with the required information:

Entry tweets must contain the following:
・A screenshot of your character in their Halloween costume
・The #KHUX hashtag
・The #SpookyContest hashtag
・An “@” mention to @kh_ux_na
・Comment (optional)

Here are a couple a sample tweets: 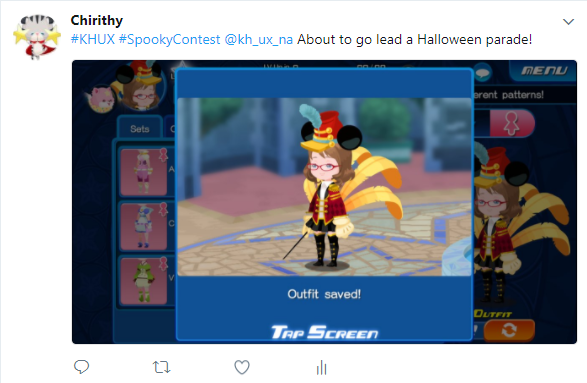 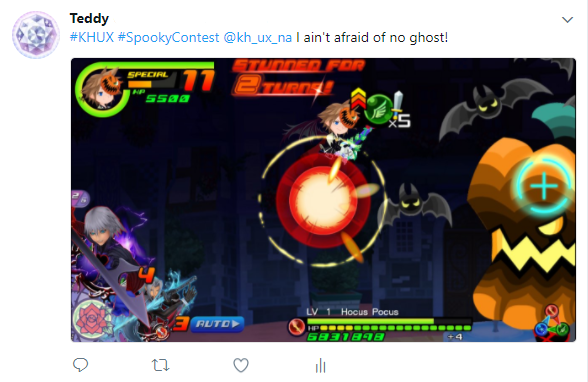 ■ Selection:
The KINGDOM HEARTS Union χ[Cross] team will select winning entries based on overall creativity and originality of the Halloween costume your character is wearing.
We will contact winners on or by Nov. 16, 2017 via DM on Twitter, so make sure you’re following the official Twitter account (@kh_ux_na)!
If we are unable to get in contact with a selected winner within 48 hours of contacting them, we will automatically select another winner.

We have more Twitter events planned for the future, so if you aren't already following, there's no better time to start!