■ Event Details
・Pooh, Tigger, and Rabbit Medals are waiting for you! By defeating enemies in this set of Union Cross quests, you'll have a chance at getting these limited-time Medals!
・Get the Pooh & Tigger & Rabbit Medal by evolving one of the three Event Medals using each of the other two Medals! 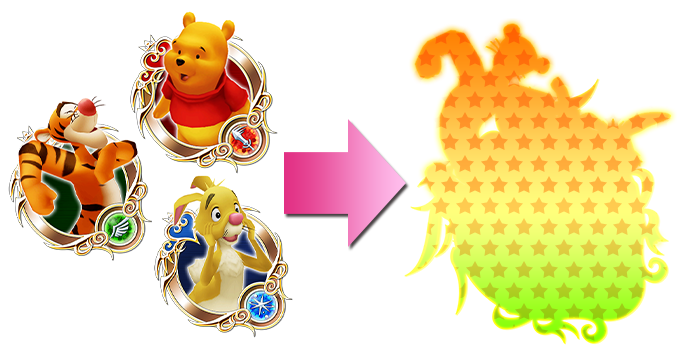 ・The Medal that drops will be different each day, in accordance with the following rotation:
Pooh ⇒ Tigger ⇒ Rabbit
During the last two days of the event (Aug. 26 and 27), all 3 medals can be obtained as random drops.

■ Cross Boards
This time there is a total of 4 Cross Boards which will be unlocked one-by-one as you clear each one. Complete them to earn Magic Mirrors, Jewels, and more!

■ Overview of Union Cross Quests
・Upon starting a Union Cross quest, your primary objective will appear on the screen. The quest will end when you complete this objective.
・During your quest, a timed objective may also appear on the screen. These are limited-time challenges, so you will want to work with your team to complete them before time runs out!
・The stages and objectives you will encounter are randomly decided based on the current Union Cross event. Work with your teammates to adapt to varying situations and tackle whatever might come your way!